Why Android developers should care about Edge Computing 🚀

What is edge computing? 🤔

Today, over 90 percent of enterprise data is sent to the cloud. In the next years, this number will drop to just 25 percent according to Gartner. Where is the rest of the data going? It’s not going anywhere. It is being stored and used locally, on the device it was created on. This is edge computing.

To bring some light into the terminology mess: The terms “mist” and “cloud” constitute the ends of a continuum.

Mist covers the computing area that takes place on really tiny, distributed, and outspread devices, e.g. humidity or temperature sensors. To make it a bit more tangible: These devices generally are too small to run an operating system locally. They just generate data and send it to the network.

As opposed to this, the cloud refers to huge centralized data centers.

The terms “fog” and “edge” fall within this continuum and – depending on whose definition you follow – can be used interchangeably. 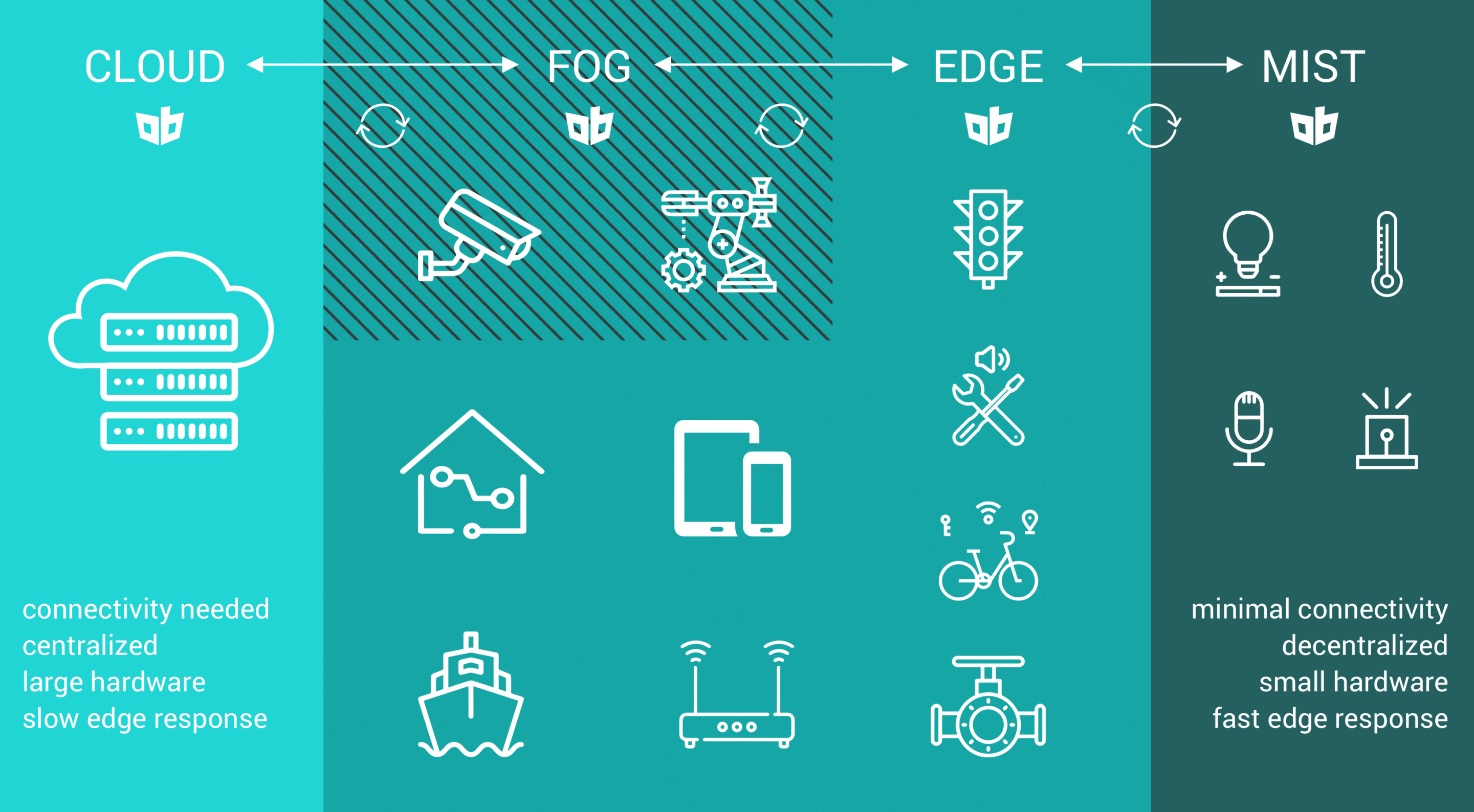 Why is the edge cycle happening again just now? 👇

The underlying megatrend enabling this shift is cheaper and more efficient hardware, as well as the emergence of edge databases. Edge databases are specifically designed to run on the edge and therefore lean and efficient. Both the number of mobile and IoT devices, and alongside data volumes are exploding at exponential rates. At the same time computing capabilities on the edge level are advancing faster than those on the cloud level. So, the edge has increasingly more power – power that is currently often underused.

New applications and requirements drive the shift to the edge:

Advantages of setting your project up in the cloud ☁️

So, what about the cloud; do we still need it in this era of Edge Computing? Setting up your project in the cloud has some advantages: First of all, the setup itself is comparably easy, as the cloud servers are managed by another organization. This also means that you do not need to worry about scalability of your servers or data loss, i.e. the need for redundancy, reducing overall downtimes. Additionally, cloud systems also are well tested, automatically updated and often encryption mechanisms are provided natively. This eases up on administration.  Generally, you can use the cloud rather quickly without worrying about lengthy and error-prone setup tasks. Using servers also centralizes the logic: clients will just call a unified interface (e.g. Web/REST).

A typical IoT-setup would often be centralized and look like this today:

Advantages of running your application on the edge 🗡️

Running an application on the edge, e.g. your Android phone, a Smart Home Server, or in the car, has a couple of advantages:

Some tangible use cases for edge computing:

Is the edge eating the cloud? 🍴

Unlikely. Often you want some data accessible from anywhere. Synchronizing parts of the data to the cloud (or an on-premise central server) allows you to combine many of the advantages from edge and cloud computing. Thus, the edge is a natural extension of the cloud that makes applications all the more powerful. We believe that future scenarios will often look like this:

This line of reasoning is supported by the fact that all major cloud companies, e.g. Amazon, Google, Microsoft, are pursuing an edge strategy.

Why should Android developers care about Edge Computing? 🚀

Edge computing and improved speed for Android, Android libraries and related products for developers were two clear sub-themes at the 2019 I/O conference – obviously low latency is a major competitive advantage.

Here is why designing your app to run on the edge will help you be successful on the Play Store: There are roughly 2.1 mill. Android Apps to choose from today in the Play Store. To stand a chance in that market you need to delight your users and get good app store ratings. Edge Computing delivers on the app traits users care about most: performance, security, and availability.

Users care about performance – a lot 💨

Whenever an app responds to a query directly instead of taking a round-trip to the cloud and back, it should be faster. More importantly, you can measure and optimize more reliably, as the latency is independent from the network connection. This enables the fast high-quality digital experience consumers want.

As an Android developer you also know that many consumers cannot or do not care, why an app is not working. If the application is not working or just responding very slowly, users are dissatisified and annoyed. Therefore, as the developer you need to make sure your app always performs well.

“When your app depends on a network, latency is out of your control.”

Now, you might need to query data from the network. That’s fine; if most of your app is running independent from a connection, there are tons of ways to optimize user experience for connectivity loss and network latency.

Security is a hot topic and can be a USP 🛡️

Users care about security, and this is a trend that will – in the face of the loss of huge amounts of personal data by tech giants – only continue to grow. When you leave data at the edge, on the device of the user, data security is much easier to provide. On top, data ownership is clear, easing up on data privacy.

Data is much more secure stored in one place  than when transferred over the network – possibly again and again and again. Android provides a good basis for keeping internally stored data safe. If data security and privacy are important for you, your app, or your users, think about keeping data locally and then only synchronizing data you really need accessible from anywhere. Last not least, while an individual phone may be hacked, it is less likely to occur and only an individual dataset is compromised (as opposed to millions of datasets). 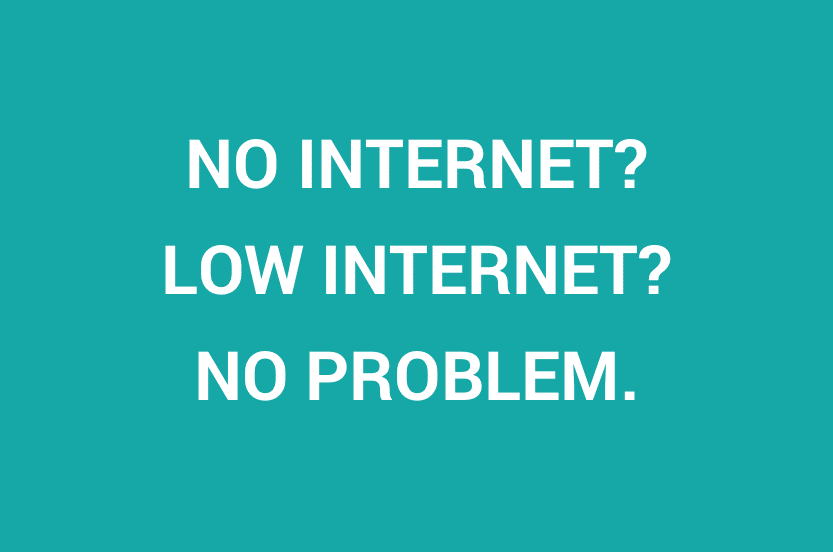 Users do not care about connectivity, they simply want to use the application when they want to – at home, in a department store, in a train, on a flight, on vacation. And when they can’t access an app, their user experience is bad. Even today in a highly connected world, there are lots of times where people have no connectivity or need to switch data off to save battery. The app that supports them in these times ;), is the one they will love and use

The most important advantage of doing an offline-first app is the availability of the app. Google translate is a great example of an app that you want to be offline-capable. Chances are that when you need it most you are in a place where you do not have a (affordable) connection. But you might also appreciate being able to read and search through your mails when you are on a plane too. Or type WhatsApp messages that go out when connected again, or just enjoy a round of Subway Surfers.

Offline-first apps make it possible to move content off the server and onto the phone. If an app only has to go to the server when it needs to, rather than all the time, it will be faster and more reliable. This is particularly significant where content doesn’t change often, but users require fast access.

The improvements in Android Q to Android’s Neural Networks API (NNAPI) and the size reduction of the model means Android phones are Edge AI ready and open tons of new possibilities for fast apps running on the edge.

With the recent changes in the Play Store rating, boosting the technical performance of your app will have an even greater impact than before.

But what about 5G?

First of all the 5G rollouts and uptake still will take some time, but if you are reading this you are building a business now. Secondly, while it will bring a faster network connection to many areas, there are caveats to a central cloud-based application that won’t change:

How do I bring my Android app to the edge?🏃

As an Android developer, chances are, you are already doing Edge Computing in many of the apps you are developing.

First of all, offline-first does not work with typical web pages. Usually, you would go for a native app, or alternatively, a progressive web app (PWA) or similar technology. Apart from multiple UX benefits and speed, most users prefer native apps and users still spend 80% of their mobile usage time in apps.

Secondly, for an offline-first architecture you need a local storage as a primary source of data, e.g. a database. Changes to data are made in this layer. Application also can and usually do have networking components to synchronize data to a server. However, this connection to the backend is mainly used in the background to synchronize the local database.

So, why does not everybody do it all the time? Well, there are use cases where it does not make sense to go the extra mile for the limited functionality that edge computing would bring, e.g. in a parking app. Obviously, most relevant data points like your car and the availability of parking spots are changing all the time. So, you really are dependent upon a constant connection, or rather several constant connections: From the spots to the cloud and from the cloud to the app. However, there is another reason: Offline-capable apps are hard. That is why we developed ObjectBox Sync.

Does any app need to run at the edge? ⚖️

As always, there are some cases where the cloud makes perfect sense, indeed is the only option – and the same is true for the edge. You need to assess what you want to achieve and where the value lies for your application and users.

Sustainable Computing: Why the edge is saving the world 🦸

If you do not need to push all the data to the cloud, where large chunks of it might not even be used, you might want to take a step back and consider the broader picture: What do all these billions of mobile and IoT devices (that are quite capable) do while they wait for the cloud to respond? Nothing.

Sending data to the cloud unnecessarily is wasteful in two respects: Use of bandwidth and server capacity (which comes down to infrastructure, electricity and physical space) and the big waste of underused resources.

Add an Edge to Your Project Today
Spread the love
We use cookies to ensure that we give you the best experience on our website. If you continue to use this site we will assume that you are happy with it.Ok