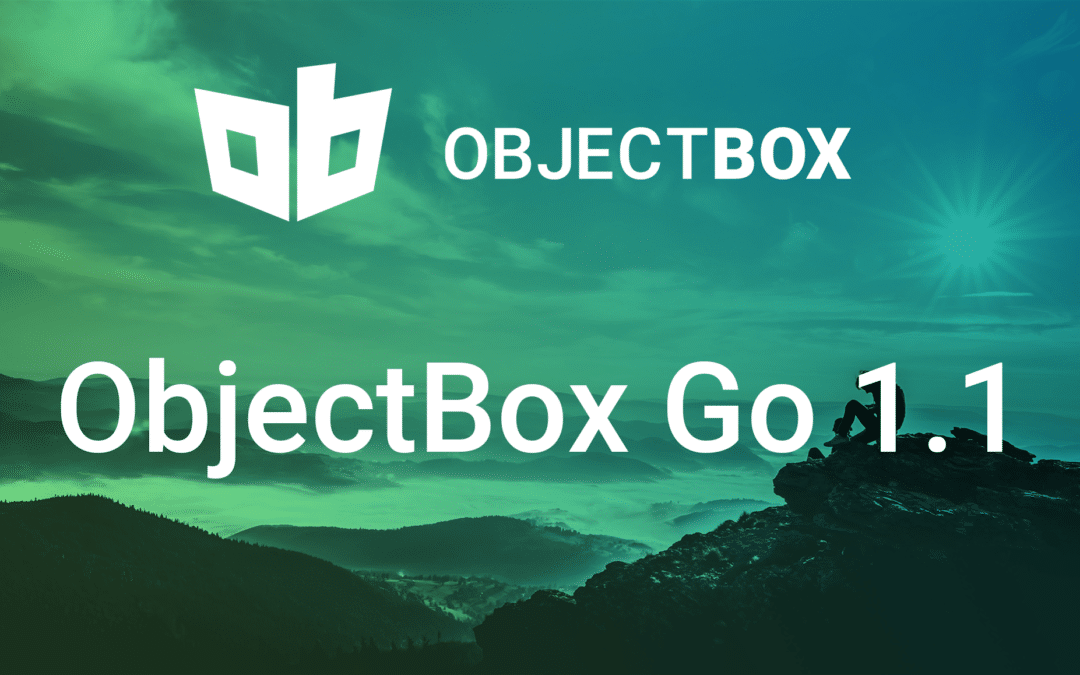 The 1.1 release of ObjectBox for Go is now available, bringing new features such as Box insert() and update() semantics, a new AsyncBox with all write operations (put, insert, update, delete), improved Queries with order and aliases; as well as some fixes and quality of life improvements, such as time. Time support or more forgiving generator code validation. For the full list of changes see the changelog.

To upgrade to the latest version, run go get -u in your project and don’t forget to re-run the generator to make sure all the code is in sync and you get the new features:

First a quick reminder how a standard (synchronous) Box works:

Now, let’s have a look at the new AsyncBox. Let’s say tasks are processed in multiple iterations by calling a “WorkOn(*Task)”. Let’s also assume that WorkOn() sets a “finished” flag on the object if it was able to complete a task in an iteration. In that case, the task can be removed from the database. Otherwise, partial progress on the task should be saved for the next iteration.

So, what’s the advantage of using AsyncBox in this example? Because we don’t wait for updating or removing a task, we just created an efficient pipeline: we can spend all computational resources on WorkOn(), while AsyncBox performs persistence in the background. Both steps never have to wait for each other.

The second advantage of AsyncBox is “transaction merging.” Because “WorkOn” takes some time, we operate on a single object at a time. A synchronous solution would require a transaction per object, introducing significant disk overhead. AsyncBox can reduce the amount of transactions required and thus dramatically improve throughput.

You may also have noted the usage of “Update()” instead of the standard “Put”. An update is different from a put as it only persists the object if it already exists in the database. Let’s say our example has another process that removes Tasks; a standard put operation might “resurrect” a task previously removed by the other process. If we don’t want that to happen, we can use update semantics. The new update and insert operations are also available in the standard Box API.

Please let us, and everyone else, know what you like about this release and ObjectBox in general. We’d love to hear from you to know what you’d like to see next.

Looking for an easy way to sync data between devices? Check out ObjectBox Sync, sign up for early access, and look out for the release early 2020! 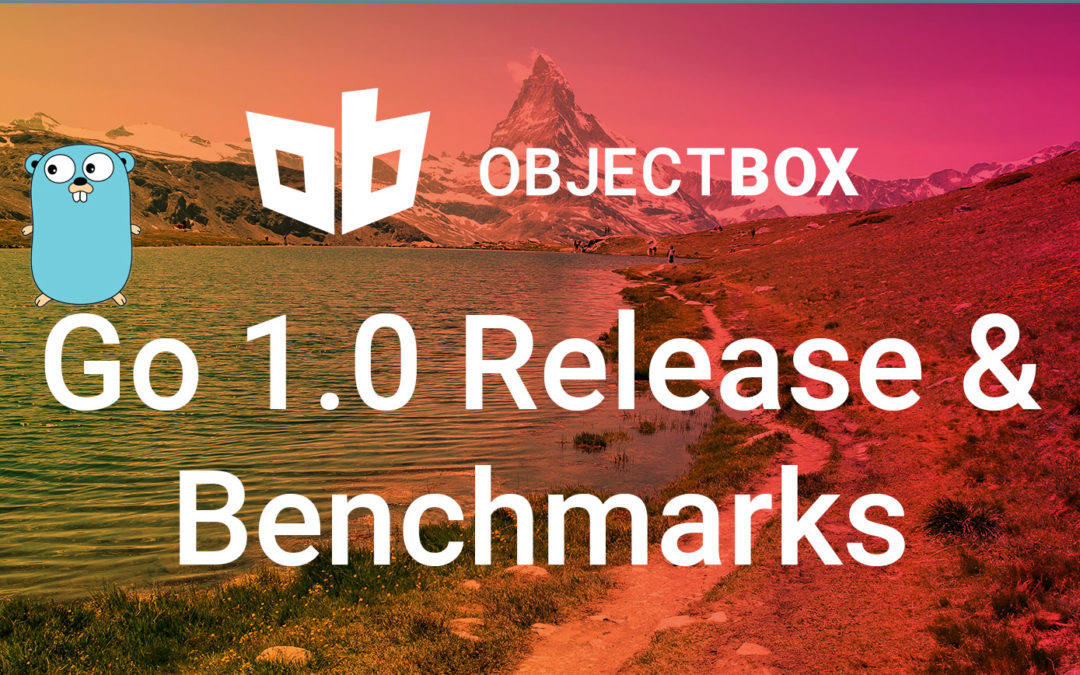 ObjectBox 1.0 is here. Late last year, we introduced ObjectBox to the world of Go – and were awestruck by the GitHub traction and feedback we got. So we doubled down on our efforts and are thrilled to announce 1.0 with many new features, a stabilized API, and improved performance. From now on your projects are safely able to upgrade.

For those of you new to ObjectBox, here is how ObjectBox persists Go structs (objects):

Let’s recap what ObjectBox Go brings to the table:

To see how ObjectBox compares performance-wise, we looked at libraries with comparable levels of storage abstraction – so not just plain SQL/Key-value storage but also ORM features. Finding embedded data storage libraries satisfying those simple criteria wasn’t so easy, but we have picked a few based on GitHub popularity:

To get an overview of the databases, we tested CRUD (create, read, update, delete), indexed and non-indexed queries. Additionally, we have compared a peak memory usage of each database during a test run. Each test was run multiple times, with garbage collection turned off and executed manually outside of the measured time. Data preparation and evaluation was also done outside of the measured time.

We tried to keep the test implementations as close as possible to each other while picking the approaches recommended by the docs for each database. The test code is available at https://github.com/objectbox/objectbox-go-performance.

The benchmarks were the only foreground application running on the PC and the given results are an average over 20 runs.

All operations were executed in batches, not one-operation-per-transaction. For GORM and Storm it was necessary to do a batch insert, update and remove inside a manual transaction because they don’t support batch operations out of the box.

The numbers were measured by running benchmarks for 100.000 object-sets for ObjectBox and GORM, while we have chosen to use just 10.000 objects with Storm because it was achieving better operations per second with a smaller set. We will follow up with a post comparing how each database fares with different data sets. 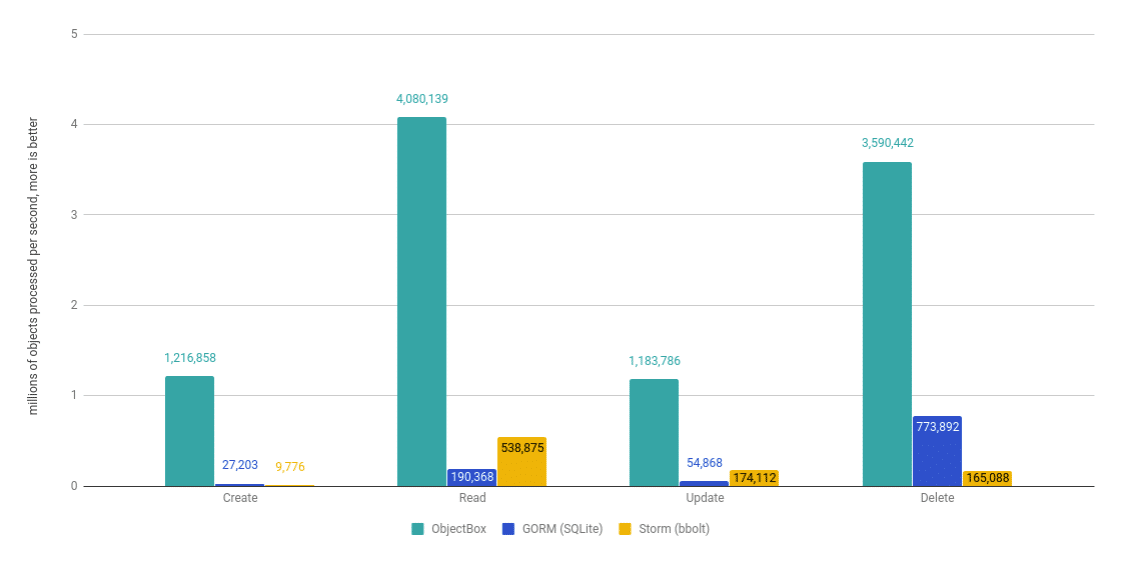 Next we looked at query performance by executing two simple queries. The first test uses an index (actually the “primary-key”) to fetch 100 objects. The second one to find 1111 objects based on a string prefix match (not indexed). The tests were executed 20 times and the average times (ms) are shown below. Note, the arbitrary number, 1111, is just based on how the test code prepares the data (strings contain an object ID, thus 1111 objects out of 10.000 start with the number “1”).

GORM/SQLite performance is very good for a primary-key based query but falls off when it has to use “LIKE” over the whole dataset without an index. Storm doesn’t catch up in either case.

Lastly, we compared the memory usage of each solution. The peak memory usage was measured externally, executing the benchmark binary using /usr/bin/time -v, taking the “Maximum resident set size”. The memory-usage test was run on 10.000 objects with one “test-run” (as opposed to 20 runs in previous benchmarks), repeated manually to make sure there’s no reasonable difference between the runs.

This benchmark shows massive difference in memory usage, which is a good thing to think about not only for small devices but also for cloud-based resources (where RAM is comparatively pricey).

Of course any results you get from performance benchmarks will always be just that, benchmarks. You should consider your application needs and, ideally, benchmark the critical scenarios yourself. If you do, here you can read up a couple of tips on how to do good benchmarks. And because sharing is caring: Do let us know what you find out. Having said that, ObjectBox does show clear lead across the board so why don’t you go ahead and start using it now 🙂

Check the ObjectBox Go docs which come with setup instructions, an introduction and information on many more topics. The ObjectBox Go GitHub repository contains all sources if you are interested in internals. Also, it comes with an example application.

With version 1.0 we hit an important milestone. We’re looking forward to your feedback and we’ll progress with additional features around queries, relations, and async operations. And of course, data synchronization that will allow you to share data among servers and clients. Stay tuned and let us know your thoughts.

Start Developing Today!
We use cookies to ensure that we give you the best experience on our website. If you continue to use this site we will assume that you are happy with it.Ok